This tournament was postponed due to a major student strike in Quebec. It was also delayed 'cause I had a request from the guy on the poster. He had a knee injury but just thought about coming back to play. So, well, I accepted and from March 24-25 th 2012 it floated on to June 15-16th 2013.

The second day was floated by the way, but back on this later.
Saturday June 15th 2013, first day of Kick Volley 04. Seven teams battling for the doubles title.
Amongst them 4 World Champions for Montreal over time.

The mixed doubles is even more interesting as top 3 World Championship finishers François Depatie-Pelletier and Marilyn Demuy met Luc Legault and Geneviève Bousquet in the final match of pool play (4 Teams playin' each other.) Luc and Geneviève took Frinki's and Marilyn's seed and they are now considered first going to the finals.

This mixed finals is postponed as the weather was pretty bad (rain, rain, rain) and a common decision was taken to wait for better conditions to play the most interesting match of the event.

Stay tuned for the results of this one. For now here are the open doubles results: 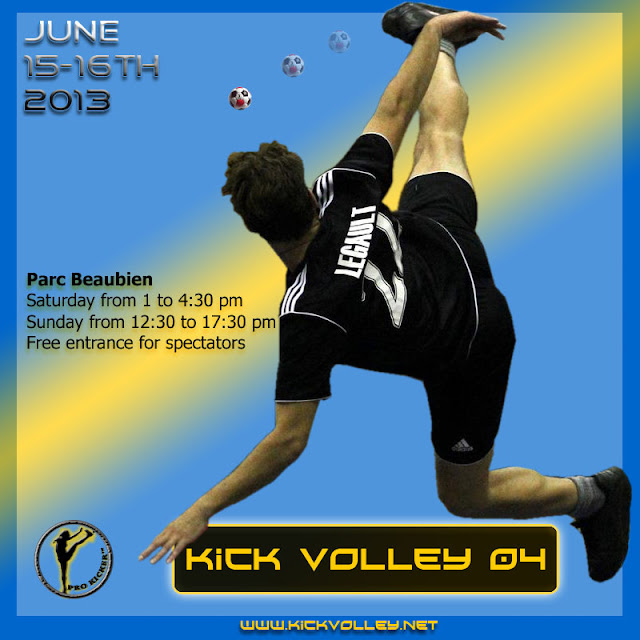 Posted by footbagarchives at 1:29 AM

A bonus feature whereby your winnings can be multiplied by as much as ten occasions. You’ll discover slot games themed on TV reveals like The Price is Right, comic guide heroes, and music stars like Ozzy Osbourne. It's difficult to know the precise variety of downside gamblers among service members since the that} navy stopped screening for it more than a decade in the past thecasinosource.com and has solely resumed screening following the 2017 GAO report.